A friend on Twitter lamented that the shift from printed newspapers to online news has led to a flood of clickbait that wasn’t present before. While it’s true that clickbait—articles whose content and headlines are designed to generate a very high number of pageviews—is a product of the digital media revolution, there is a long tradition in the media world of using attention-grabbing headlines, titles, and graphics to get people to buy a newspaper, magazine, or journal.

In the United States, the tradition goes back to early periodicals of the mid-1700s, which used strongly worded headlines and satire to generate outrage about the British and other issues of the day. The wave of “yellow journalism” in the mid-1800s continued the trend, which saw the establishment of tabloids in the English-speaking world which mastered the art of succinct, irresistible headlines on the front covers of newspapers. The Sun (U.K.) and the New York Post are modern examples of the format. Internationally, the rise of labor nationalism, fascism, anti-semitism, and communism gave rise to hundreds of newspapers and magazines that used bombast and hyperbolic headlines to attract readers and advance their respective causes.

In the 1990s, Jimmy Lai, a Chinese media entrepreneur, brought the tabloid format to Hong Kong with the Apple Daily. When the format was later exported to Taiwan, the boring, conservative Taiwanese newspaper competition didn’t know what hit them. Some newspapers in China tried to follow the format, but with limited success, owing to the Chinese Communist Party’s strict media controls and the power and influence of local politicians and business leaders.

There’s another digital trend that has historical precedence in print journalism: Keyword hijacking. There are a few flavors that pop up in the modern-day world. The first involves marketers exploiting interest in one type of product or service by including related keywords in web pages, advertisements, and social media, even though there is otherwise no direct connection. The second involves a company, organization, or individual taking a trending story on social media and then creating online content such as a post or article that includes keywords related to the trend. The reasoning is, people will be more likely to click the headline or tweet or post because they are interested in following the trending story.

The term “keyword hijacking” has become synonymous with shady marketing. People feel tricked when they click on an ad or a headline or a hashtag and expect to find information about one thing, and instead they are treated to information about something else. In some cases, companies will insert keywords and hashtags to promote themselves even if the issue involves grief, suffering, or something quite serious.

Keyword hijacking is not new. While doing some genealogy research a few years ago, I stumbled upon this advertisement in a Lockport, New York newspaper: 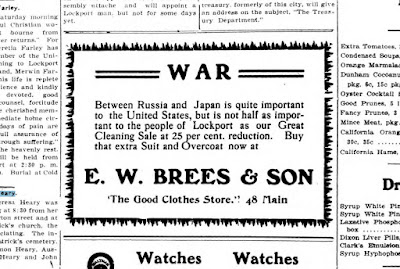 Some context: This was published in 1904, when tensions between Russia and Japan were heating up and war was anticipated. The store had a bit of a wordsmith placing the ads (the "Good Clothes Store") and this person knew that putting “war” into the headline would get additional eyeballs. It was tasteless, but keyword hijacking worked then as it does now.
Posted by I Lamont at 12:26 PM