Tweet
Last week, I documented the closing of a legitimate ebook lending service in "What happened to LendInk? The owner responds." The reaction to those authors who had helped bring LendInk down -- either through joining the Internet torch mob or sending "hundreds" of cease & desist letters (and apparently some DMCA takedown notices) -- was characterized by fury and outrage. Here is a sample from LendInk's Facebook page:


"I read nearly every comment on this page. From the countless authors that carelessly destroyed Dale's business, I saw only two apologies. You took something that was designed to help you and was perfectly legal, and smashed it in to the ground. You should be ashamed of yourselves."

The anger is understandable. LendInk owner Dale Porter was providing a community service to readers, and abided by the terms of Amazon's and Barnes & Nobles respective ebook lending and affiliate programs. But his site was driven off the Internet by a baying mass of authors (indie and otherwise) who either:


I excerpted one of the comments on my original blog post, but you can see more of them on LendInk's Facebook page from earlier in the month: 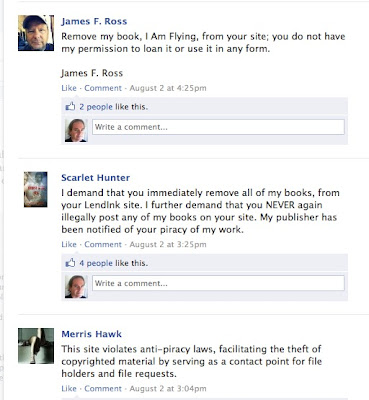 The authors who participated in the frenzy are now reaping what they have sown. The criticism is deserved, and many are apologizing on LendInk's Facebook page and elsewhere:


"I was one of the misguided authors involved. Though I didn't send a DMCA, I did come here to this page and ask for my titles to be taken down. For this I am truly sorry though I'm sure it's too little and too late. It's the least I can do. … I feel horrible about the part I played in this and how far it's gone."

Other author apologies are popping up on Twitter, in online forums, on Goodreads, and in the comments section of my blog post. There is also a lot of discussion about what went wrong and the factors that led to this state of affairs.

But for the authors who are silent or unrepentant, a new torch mob has emerged, targeting them for personal attacks and outright revenge.


"The one who fired abusive comments directed toward me, my books and other writers who were only standing up for their rights, shame on you! Your emails and abusive threats are all accounted for, so please, continue to dig your own hole. Hopefully you will have enough grace to go hide in it, and fester there alone with your hate."

It went beyond personal attacks. Someone gave her book a one-star review on Amazon, leaving this comment:

Additionally, apparently this Author considers anyone who treads on Author's rights to be scum, yet writes Cease and Desist letters for legitimate, fully legal sites because the author is unable to fully read and comprehend what is going on. Lack of reading comprehension, generally is not a trait i look for when seeking out authors to read. I highly recommend you avoid this one both for their over-inflated sense of their own work's value, and for their careless use of DMCA."

Another person, posting on LendInk's Facebook page, put together a list of authors who had apparently been part of the first mob that slammed LendInk or demanded that their content be removed. After being challenged, the person who compiled the list added:


"They all collectively razed a legitimate business to the ground, leaving a small business owner with nothing but a mailbox full of threats, legal and personal. You don't think that should have consequences?"


"I will be attempting to add the author’s book pages at Amazon.com and BN.com so you can access what books never to buy in an easier fashion."

Despite the call for a boycott, and a new post that singled out an author who still insisted LendInk was wrong, the blogger claimed "I didn't encourage any sort of retributive action here whatsoever."

Surprisingly, there are even some authors who support retribution. I spotted this comment by a Canadian author on Kindleboards:


"I'm going to say this for what it's worth, and okay, it may be a controversial opinion... I think the authors involved with this deserve every one star rating they get.

They shut down a site that was bringing exposure to authors and providing a service to readers. In a very real way, they took money out of the pockets of authors as well as Dale himself, both for what LendInk was and for what it could have become. And for what? For the idea, the shocking idea, that someone, somewhere, might have gotten a copy of their book for free.

Not 'they did get a copy'. 'They might have gotten a copy'. They attacked LendInk without even knowing for sure that their livelyhood had ever been harmed.

On top of that, it's one thing to destroy a legitimate business because it could be used for piracy, but it's quite another to destroy a legitimate business because you can't tell the difference between that and actual piracy. As far as I'm concerned, any of these authors that still maintains they did the right thing needs to get slapped around with bad ratings - there is no other way, realistically, for the community to punish them. The ones that apologise? It's good that they're willing, but they're not owed forgiveness from anyone, and if they continue to catch flak for what they did, then so be it (though they have my respect at least)."

As I said earlier, the offending authors deserve criticism for their actions. They should at least apologize to LendInk owner Dale Porter, and do whatever they can to right the wrong. But I am very disappointed to see a new witch hunt taking place, that has escalated to personal attacks, demands for "punishment" and "consequences", and bogus one-star reviews. It's a sign that mob mentality is taking over -- ironically, the very thing that helped bring down LendInk in the first place.

Things have gone too far, people. Let's keep the discussion going, but please end the vitriol and extreme actions that do nothing to help Dale and his business.
Posted by I Lamont at 12:57 PM