In 1996, I bought a used IBM ThinkPad 701c (486 architecture) in a Hong Kong computer market. I think it was about $900. A journalist at the time, I was backpacking through China and Southeast Asia, and needed something small yet powerful enough to handle writing assignments, email, and a manuscript idea I had floating around in my head. I was also transitioning to digital media, and needed something that could render my hand-coded HTML and scripts.

Ten years before "netbooks," IBM's wonderful little 701c ThinkPad had a very unique approach to compact size: A "butterfly" keyboard that unfolded when you opened the laptop. There are some photos and historical information about the IBM ThinkPad 701 here. This video show the 701c in action. It's pretty much what I remember ... a little thick, but very functional. And more powerful than I could have ever imagined.

Supposedly, the design was inspired by a black bento box. Although primitive by today's standards, it was a solid little laptop that served me well for the tasks I was engaged in at the time -- writing, Web surfing, learning HTML, email, and Word. It ran Windows 3.1, but I could also run programs from the DOS command prompt.

At one point, I set up my little writing studio in the Golden Queen hotel, Georgetown, Penang, on peninsular Malaysia facing the Indian Ocean. One day, while taking a break from writing and fiddling around in the DOS directory structure, I discovered an interesting folder. /id ... DOOM? What happens when I RUN the .exe ...

The next thing I know, I am playing DOOM. On a tiny IBM laptop. Oh, man! 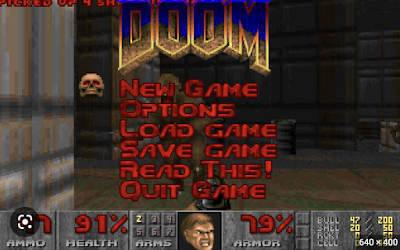 In the late 1990s, I had a house fire. No one was injured, but the butterfly ThinkPad was burned, the exterior case charred and partially melted. There was data on it that I wanted, including a manuscript. I brought it to the local IBM repair center in Taipei. Two young techs were at the service desk, and hardly battered an eye when I took the charred, plastic hulk out of a plastic bag. They got a small electric saw, cut open the case, removed the keyboard, and took out the hard drive which looked intact. They attempted to connect it to their diagnostic machine but it wouldn't read, unfortunately. But I really respected their attempt.