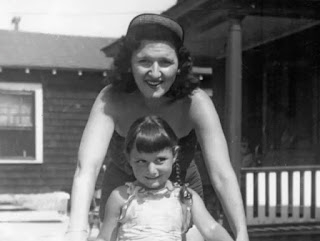 I'm reading a memoir by MIT professor Sherry Turkle, The Empathy Diaries. I attended a talk she game some years ago at the MIT Media Lab and was fascinated - her research revolves around questions about how technology impacts people. In the book, she not only traces the evolution of her academic passions, but her personal influences. She shared some interesting facts about her mother, shown above. There were some discrepancies listed on official documents filed in New York City in the 1940s and 1950s:

"She had a drivers license that gave her incorrect height and also shaved a few years off her age, something she told me that certain ladies at the Department of Motor Vehicles would agree to do, understanding it was better if unmarried women over 23 were officially younger. When she married Charles Zimmerman in 1947, she took a year off her age on the marriage license declaring herself 28. Six years later when she married Milton Turkel, their marriage license had her at 29."

Both scenarios described by Turkle - asking a DMV clerk to fudge the birth year, or providing the wrong ages on marriage registrations - are almost impossible now.

But a long time ago, this was not unusual. We know not only because of Turkle's mother's experience, but because a few people on my own family tree also had discrepancies, particularly for marriage certificates and job applications. 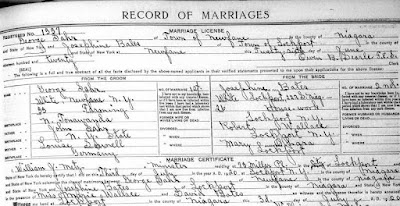 In the pre-digital age, many people (including immigrants, cross-country migrants, adoptees, and poverty-stricken families) may not have had access to birth records. Government officials had to go by what they were told, and may not have been told the truth for various reasons, including very compelling reasons. In some cases, sympathetic clerks may have helped, as we learned from Turkle's book.

We know this happened in other situations, too. Teenagers lying about their age to join the military was commonplace. An estimated 200,000 underage men and women enlisted during World War II. Not long after the war, enumerators for the 1950 federal census (released in April) could note in a dedicated field on the census form if they thought a respondent was not being truthful!

The moral of the story: Sometimes ancestors supplied incorrect information to officials, and they had good reasons to do so. Try to confirm dates and ages using other types of records that are less likely to be fudged, such as birth and death certificates.