What happened to LendInk? The owner responds.

(Updated with comments from LendInk's Dale Porter, below. Several authors who originally opposed LendInk have responded in the comments section, below. I have also written a follow-up post, "The LendInk Witch Hunt, Part II: It's gone too far", which is linked from the bottom of this entry.

LendInk is no more (Update: It's back online, see note at the bottom of this page). The site, which matched up people who wanted to loan or borrow e-books, featured an easy-to-use interface (see screenshot, below). When a match was made, the parties were sent to Amazon or BarnesAndNoble.com to complete the e-book loan.

Loaning certain Kindle books in this manner is allowed per the Amazon lending terms and the rights outlined by the publisher. Here's how the Amazon help page describes the arrangement:


Kindle books can be loaned to another reader for a period of 14 days. The borrower does not need to own a Kindle -- Kindle books can also be read using our free Kindle reading applications for PC, Mac, iPad, iPhone, BlackBerry, and Android devices. Not all books are lendable -- it is up to the publisher or rights holder to determine which titles are eligible for lending. The lender will not be able to read the book during the loan period. Books can only be loaned once, and subscription content is not currently available for lending.

As an author (my books are in the how-to space, addressing topics such as what is Dropbox, What is Google Drive, and more), I don't have any problem with this type of lending service as long as it's not abused.

However, there are many publishers and independent KDP authors who did not understand loaning and lending on Amazon's Kindle platform. Others wrongly assumed that the titles appearing on LendInk were pirated. Here's how one angry KDP author reacted:


I noticed my work there and sent the site a Cease and Desist Notice, giving them 48 hours to remove my work or face prosecution. They were in breech of copyright and deserved to be shut down. Am I proud they have been shut down? Am I proud to have stood up for my legal rights as author? You betcha! If they were a legitimate site and had written consent from each and every author to display their work for free (forfeiting their royalty income as a result) then I doubt very much that the site would have suddenly disappeared overnight. I am tired of plagiarism, book piracy and cheap-*ss scum bags who won't part with a measly $2.99 or $4.99 to support authors and show respect for their hard work, not to mention the graphic artists, editors, photographers who also contributed to the birth of an author's ebook.

Although not legitimate, hundreds of C&D letters and other complaints helped kill LendInk, according to LendInk's Dale Porter (see my interview with him at the bottom of the page). Dale also posted the following explanation of what happened on several forums:

My name is Dale Porter and I am the owner of Lendink (or what's left of it). I can say without hesitation that Lendink was not a pirate site, we did not store, transfer, lend or publish any ebooks, period! All we did was attempt to provide a means for people that enjoy their ebooks to meet other like minded people and share their "lend" enabled ebooks. The lending process was completely handled on the Amazon or Barnes and Noble websites.

Lendink was operated solely by myself and operated the last couple of years with absolutely no income.

There is a lot of misinformation on the internet claiming that we hosted ebooks illegally, that Amazon did not allow us to lend ebooks, etc. Let me try to address some of those here.

Amazon did not allow us to lend ebooks. This is a 100% true statement and the fact of the matter is, Lendink did not nor did it ever attempt to lend ebooks. All we did was put person A in touch with person B and redirected A and B back to Amazon or Barnes and Nobles where the actual lending took place.

Lendink was hosting ebooks illegally. This statement is 100% false. We never hosted any ebooks on our servers. We attempted to dispell this rumor on our FAQ page and for those that actually read the page, it usually cleared up the misunderstanding. For those that did not read the page, all I can assume is that is simply doesn't matter at this point. No amount of explaination would have satisfied the vultures looming over head.

The Lendink website is down, this is proof they were pirating ebooks. Really, this is proof that we were pirating ebooks? The fact of the matter is that our host company was so overwhelmed with hate mail and threats of lawsuits that they felt they had no choice but to suspend the site. These hatefull people did nothing but harass and threaten Lendink and our host company to the point that it just didn't make sense to keep the site online. For those of you on this site that are patting yourself on the back for bringing Lendink down, shame on you. I only hope at this point that you see the same results with your books and your writing career.

I am simply a hard working guy that was trying to provide a legit service. Let me ask you all this, if I truley intended to use Lendink as a pirate site would I keep my contact information clearly associated with the site? Would I form an LLC and run the site as a business? Would I actually take the time to file for and receive a Federal Trademark for the site? These are not the actions of a person bent on stealing other persons intellectual property. The site had been negelected the past year or so and this was due to health issues related to my service connected injuries. Working a fulltime job to pay the bills and health issues just took their toll on me and unfortunately the site suffered. My plan was to ride out the Amazon vs. California Sales Tax dispute and then pick up when I was able to make some income from the sale of books. Sadly, it appears that my American Dream has been left as road kill at the hands of misguided individuals.


I contacted Dale with some follow-up questions, and he sent the following replies:

Who was threatening lawsuits? Was it authors, publishers, Amazon, other rights holders?

Dale: "At this time, the host company is only advising that they have received hundreds of threats regarding possible lawsuits if they did not take Lendink.com down immediately. I do not know personally if it was a result of authors, publishers, Amazon or other rights holders. I have not personally been in contact with anyone other thaan the host company. I do however have a certified letter awaiting my pickup at the post office which is from a company called Noble Romance."

How many people were using the site per month before it was shut down?

Dale: "At the time the site was suspended, Lendink had 15,000+ register users. Not bad considering the site has been on auto pilot for a year or so due to my health issues."

How did you make money from the site?

Dale: "When I purchased the site, I was an Amazon Affiliate and the hopes were that I could make extra income selling books as an affiliate and then earn a little extra from advertising. Unfortunately, shortly after I purchased the site, Amazon and the State of California had a large dispute over the collection of Sales Tax and in response, Amazon cancelled all California Affiliates. This meant I could not make money from selling the books but it did not prevent me from matching people that wanted to lend their books according to the terms set forth by Amazon and Barnes and Nobles. Since that time, I have not made any income from Lendink.com. It was kept alive in the hopes that Amazon would some day open up the affiliate program to California businesses again."

What other communities/sites are offering similar matching services for loaners/borrowers of ebooks?

Dale: "I know of a few sites such as Lendle.me, the Kindle Book Club and a few others. Many of the site owners contacted me when I first purchased Lendink to wish me best of luck. We never really consider each other as compteitors or business rivals. We all enjoyed ebooks and simply wanted to provide a service to others."

"The hosting company has offered to reinstate Lendink.com on the condition that I personally respond to all of the complaints individually. I have to say, I really do not know if it is worth the effort at this point. I have read the comments many of these people have posted and I don't think any form of communication will resolve the issues in their eyes. Most are only interested in getting money from me and others are only in in for the kill. They have no intentions of talking to me or working this out. So much for trying to start a business and live the American Dream."

Update 8/10: Lots of people would like to contact or help Dale. I would suggest doing so through the LendInk Facebook page, which contains additional discussion about what happened.

Update 8/13: I have written a follow-up post, LendInk Witch Hunt, Part II: It's gone too far.

Update 8/14: Dale has started a crowdfunding campaign to bring LendInk back online.

Here is a screenshot of the original LendInk service: 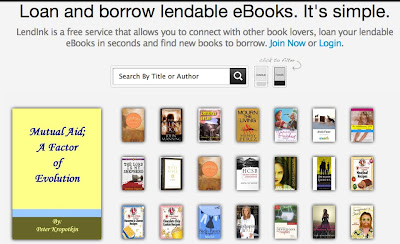 The message now seen on LendInk.com: