Do people judge an ebook by its cover?

Last month, I conducted an experiment with my first ebook, a Dropbox for Dummies alternative. I wanted to measure the impact of getting a professional cover design. Was it worth the extra cost to hire a pro, or is a DIY cover good enough for a niche topic? I tried both approaches, and in this post, I'll show the designs I used and the sales data for the DIY vs. professional cover designs.

The story starts in June, when I began writing my first ebook title. I published Dropbox In 30 Minutes on July 8 in the Kindle store, BarnesAndNoble.com, and as a PDF. Except for external review, it was a completely do-it-yourself effort. Writing, formatting, file conversions, marketing and cover design were handled by myself.

During the production process, I was mildly surprised to discover that most self-publishing platforms aren't picky about design standards. For instance, as long as you submit files that meet the required pixel counts, Kindle Direct Publishing generally doesn't care what you put on the cover.

This was perfect for my early ebook experiments. Not only did I not have any cash to spare, I also wanted to have a complete understanding of the processes involved in ebook production, including those that are outside of my area of expertise, such as cover design.


So, after I had written the first draft of Dropbox In 30 Minutes, I cobbled together a cover using GIMP, a free image editing program. My only guidelines were the recommended pixel counts and width/height ratios for Kindle. Here are the specs listed in the summer 2012 edition of Building Your Books for Kindle:
I also paid attention to Mark Coker's advice in Smashwords Style Guide. I don't use Smashwords' distribution services, but Coker wrote a good beginners' guide to ebook production, and I felt that this recommendation made sense:


Make the text crisp and clear. Remember, your cover will be shrunk to the thumbnail size, so you want all the cover elements to look good in a small image. This means, if you make your title or author name too small on the cover, it’ll be invisible in the thumbnail.

Clearly, strong colors are key. They are far more likely to be noticed than bland or grayscale cover designs, especially when it's listed in thumbnail form with a bunch of other covers (for example, in Amazon search results).

This is what I came up with for my first design: 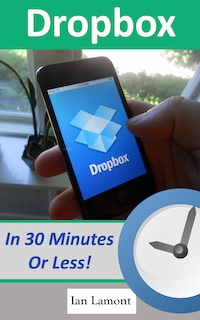 As I look at it now, I have to cringe. It's not only bad, it's laughable. But it did the job: It clearly communicated what the ebook is about, even at thumbnail scale. I later replaced the green color with red, but all of the other elements stayed the same.

By the end of July, I had sold about two dozen books, or roughly one per day. Most of my sales were through Amazon. By this point, I was already spending a lot of time on DIY marketing, including the book website, which prominently featured the DIY cover image. I had also optimized the Amazon title, description and keywords, which were important to how the book ranked in Amazon's search engine.

But as July turned to August, I began to wonder: Was my DIY cover hurting me? I looked at the signatures on the KBoards author community, and could see that other self-published authors were spending money on pro covers ... and the covers looked really good (you can see a few examples on the author signatures on this KB forum page). In a perfect authors' world, good content alone would drive sales and people wouldn't judge books by their covers. But in the real world ... they usually do judge books by their covers. For fiction books, eye-catching characters and evocative scenes can capture readers' attention. For non-fiction or educational titles, the qualities that tend to matter are "informative" and "professional".

I decided to do a test. How well did the book sell with my DIY cover, vs. using a professional cover? I contacted Steve Sauer of Single Fin Design. Steve is an ace designer who I knew from my days at IDG's Network World magazine. He had put together some amazing magazine covers, and I reckoned he would be up to the task for an ebook cover. I was right on that count. Here are the specifications I communicated to Steve via email:

And here are the first set of designs I got back a few days later: 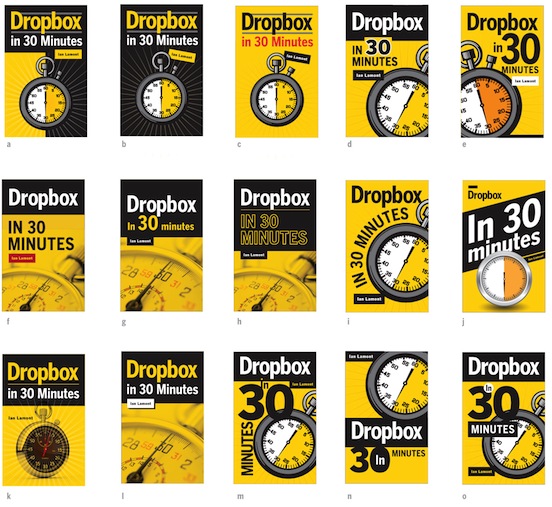 I loved the bold fonts, contrast, and graphic elements. However, the yellow color was an issue. It stood out, but it didn't work for me. I asked for a different palette, and told Steve which designs and design elements worked best for me (consulting my family helped identify the best ones). This is the second round of design comps: 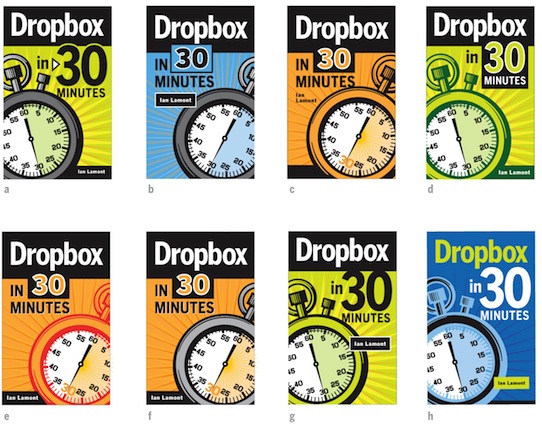 In the end, I decided to go with the following design, and told Steve I wanted it to be the template for other books going forward in the "In 30 Minutes" series: 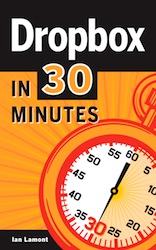 As for the question of how the new cover impacted sales, I uploaded the new cover to Amazon and my Dropbox guide on August 19. I  didn't change the title, keywords, or any other metadata, as I wanted to measure the impact of the new cover without being clouded by other changes. Yes, I recognize that this does not completely isolate the influence of non-Amazon factors such as seasonal buying trends, external media influence, etc. But there was a change, as shown in the sales data for the first 19 days of the month, vs. the last 12 days of the month:
In other words, sales averaged two per day with the DIY cover, vs. three per day with the pro cover.

In addition, during the second period, the book broke the top 25,000 "paid in Kindle store" ranking for the first time ever, and Amazon search ranking for "Dropbox" in "All categories" rose from #5 to #3. While increased sales pushed ranking up, the rise could have been affected by the declining sales of other titles. And, for what it's worth, sales have since slowed, along with ranking. Search ranking could have also been impacted by the withdrawal of other titles from Amazon's product catalogue.

Going forward, I am going to be using Steve's services for my other books. His rates are reasonable, and I really believe in the long run professional cover designs will help sell more books. It also takes a time-consuming task (fiddling with GIMP) off of my plate, which allows me to concentrate on writing and marketing my books.
Posted by I Lamont at 8:58 PM