Tweet
(Updated) There have been a spate of articles about "drone journalism" in the past few days. The concept: Stick a camera on an unmanned flying machine, and use the device to get a new perspective on news events ... or go to areas where human camera operators can't access.

If you follow the trail of news stories, the term started popping up late last year around the OWS movement as well as a Polish experiment called RoboKopter. I could not find any Google News references before 2011.

But that doesn't mean people weren't doing it. 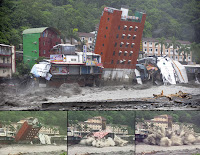 In August 2009, I travelled to Taiwan right before a massive typhoon hit. Morakot washed out roads, flooded towns, and killed hundreds of people. The inset picture is of a hotel in southern Taiwan that eventually toppled into a river. You can see more pictures of the devastation here.

Even in the big cities, getting around was difficult owing to flooded roads and damaged bridges. Journalists had a tough time covering the story. This was especially true of TV journalists, who tend to have more gear to lug around.

But in the midst of the post-typhoon coverage blaring on the TV in the days after the storm, I saw a remarkable shot of traffic slowly moving over one of the few bridges that was still open in one of the southern counties. It was taken adjacent to the bridge, about 30-40 feet in the air. "How the hell did they get a boom over that river?" I thought. And then I heard a very high-pitched buzzing sound and realized that it wasn't a boom -- it was a remotely controlled helicopter (aka RC helicopter) with a camera attached. The footage was edited, so I am not sure if the video was streamed back to the news van or recorded with on-board digital tape. Nevertheless, it was a pretty ingenious way to cover a major news event.

I wouldn't be surprised if Taiwanese journalists hadn't used similar techniques before 2009. Typhoons hit every year, and flooding is typical. In addition, some Taiwan news organizations have shown a great deal of innovation in other areas. In 2006 I blogged about how The Apple Daily shook up the Taiwanese newspaper market, and millions of people remember the first 3D animations of the Tiger Woods scandal created by a Taiwanese studio using modified game software.

Update: My old CTV colleague Harriet Xiong reports: "My colleague 小李 told me a local hired company 飛虎 (Flying Tiger) provides the RC helicopter service on a case to case basis, roughly NT30,000 for about 3hrs per coverage. He believes the footage is stored in tapes rather than streamed back the news vans."