What does # mean in twitter? (Or, all about hashtags)

(Excerpted from my Twitter guide, Twitter In 30 Minutes.) You may notice that some words in tweets have the hashtag or pound symbol (#) added to the front. Occasionally, there will be a hashtagged phrase or acronym with all of the spaces and periods removed, like #thingsthatbotherme. What does # mean in Twitter? The blog post below explains how to use them, as well as some hashtag no-nos.

Hashtags are a Twitter convention that lets people easily find tweets about the same topic. By adding a hashtag to the front of a word or phrase, it turns it into link that is hooked up to Twitter’s search engine. Click the link, and the most recent tweets that include the same hashtag are displayed. Here’s what shows up when I click on #Bulls: 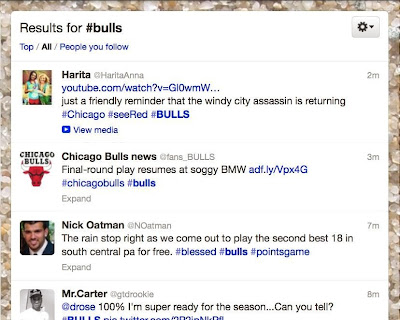 Hashtags serve other useful functions as well. They alert other Twitter followers to the fact that the tweet is about a certain topic that may otherwise not be apparent. Let’s say you’re watching the Oscars on TV, and you see someone wearing a beautiful dress glide by the camera. You could ask your Twitter followers:

Many people may not know what you are talking about. But they will if you add:

By adding #oscars, it’s clear you are talking about the awards ceremony, and not something else. Moreover, if any follower clicks the #oscars link, they’ll see all of the other tweets tagged “#oscars”.

Sometimes people create funny hashtags. The television host Jimmy Fallon and his writing team are especially skilled at this. They ask their viewing audience a funny question and then tell them to use a hashtag to let the writing team (and other viewers) see the answers. Here’s are some of the responses to his hashtag #WorstCarIEverHad: 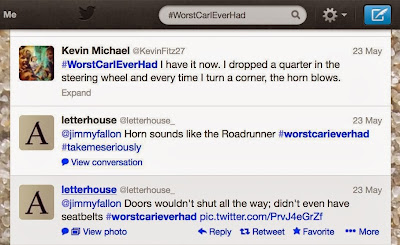 Hashtags are also used to tag sporting events (for instance, #olympics), political races (#election2016), conferences (#ces2014), and practically any other event you can think of.
Some new Twitter users make the mistake of turning every word in their tweets into hashtags. Here’s an example:

It’s irritating and unnecessary. They tweets are hard to read. In addition, hashtagging common nouns, verbs and other words doesn’t add any value if people click on the hashtags.

Another mistake involves using the wrong hashtag. For instance, followers of the Boston Red Sox generally use #redsox to talk about their team, not #bostonredsox or #sox.

Mistakes can also happen when a single hashtag is used by two different groups of people. Check out #gastro, which is used by people who like gourmet food as well as doctors and scientists who are interested in discussing gastrointestinal diseases: 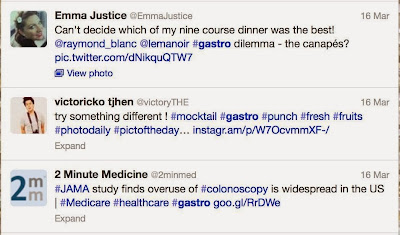 Bottom line: Choose your hashtags carefully. If I am interested in using a particular hashtag in a tweet, I often search Twitter first to make sure it’s the appropriate one to use.
Posted by I Lamont at 11:57 AM