Google appears to be getting ready for re-entry into the People's Republic of China or Soviet Russia, judging by the "Revisionist Concepts: Unacceptable Anti Content" notification I received from the Google Adwords team for one of my AdWords ad campaigns for Lean Media.

Here's what the advertisements looked like. I created four simple text ads promoting the book and the Lean Media framework: 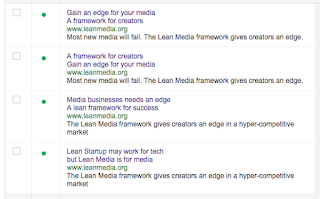 Anything seem wrong? These ads are about as milquetoast as you can get. Yet AdWords reviewers or algorithms thought the ad contained extremely offensive ... something. See for yourself:

What does that even mean? The email doesn't explain, and Google's support website was no help either. Honestly, it sounds like something a Communist Party official might hand down to a hapless journalist or dissident before sentencing him or her to the gulag.

To be clear: Lean Media is a production framework for people who create media. The 50,000-word book I wrote is apolitical, non-offensive, and encourages media creators to make better media that audiences love. There are tons of real-world examples, from an art-photography publisher in China to global media brands like Minecraft and The Simpsons. Even if the book were related to politics or some other controversial subject, there's no reason Google should ban it ... at least not in this country.

Putting on my tinfoil hat: What I suspect happened is my recent public criticisms of Google AdWords about misleading settings for locations and ad fraud got noticed, and someone flagged it for additional review. "Anti-content" was the only thing they could come up with, and they banned the ad.