The evolution of reading in the digital age

In the past few years, a lot of people have remarked about how their reading habits have changed. Here’s an example I saw on Hacker News earlier this week:


I was a good reader throughout my childhood, youth and academic years. Lately, and after a couple of decades, it's becoming increasingly challenging to focus, consume and finish books. I'm becoming the modern age illiterate. I'm usually squeezed for time - but even if I find some, I don't pick up where I left.

Does anyone encountering the same challenge? Any ideas/tips that could help overcome the cycle? Do you think it's caused by modern information overload, distraction addiction, or perhaps dealing with short cryptographic lines of code?

I know exactly what he or she is talking about. I loved reading when I was younger, everything from newspapers to novels. I took a long break from reading for pleasure when I started my first graduate degree in the mid-2000s, and never really got back into it. Part of the reason is I don’t have enough time to read. I am very busy with work, even on the weekends and in the evening (after dinner is actually my most productive writing time). When I do have free time, I like to spend time with my family. I can watch TV with them or even play video games with my son. But it’s hard to share a book.

But there’s something else. My reading habits have really changed. What I find myself doing now with most long-form Web or mobile content, as well as printed magazines and newspapers, is skimming to get the basic facts or quotes and then moving on. I just don't have the time or attention to stay focused anymore. 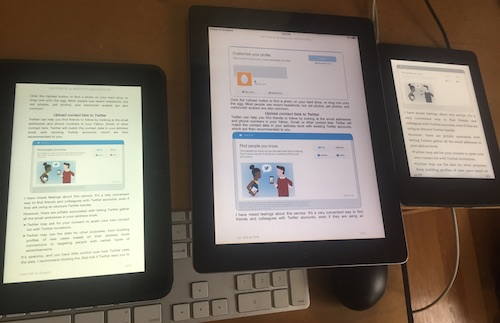 As for books (fiction and nonfiction), I find myself skimming when I use the Kindle. The Kindle Fire is even worse because of the easy access to other distractions. For printed books I can focus but I have found my threshold for abandoning a book is much lower. I did this recently with a novel by an author I used to love (Martin Cruz Smith if anyone is curious). I just felt the characters in the new novel were wooden and I noticed some basic editing errors. I returned the book to the library after about 40 or 50 pages.

One of the commenters in the Hacker News thread speculated that the community focus on programming in bursts while looking at snippets of code all day may explain the change. But that hypothesis doesn’t hold for me … I don’t look at much code. Indeed, a large part of my day job involves looking at or writing long pieces of text for the In 30 Minutes series.

Rather, I believe the change in habits results from a combination of information overload, easy access to screens, and training our minds (through exposure to text messages, tweets, online updates, short video clips, etc.) to prefer condensed communication.

It’s an uncomfortable trend. On the other hand, I also see it as part of the evolution of media and society. If we look back through history, we can see how other new media had a similar impact. Newspapers, film, and television changed styles of writing and peoples' preferences for reading materials and storytelling. Then, as now, there was great discomfort in the way media and storytelling evolved. A 1961 speech by the then-chairman of the FCC called television a "vast wasteland." If you go further back, there was negative reaction to the introduction of radio, the use of photos in newspapers, certain types of stage plays, and even opera, which was seen by 17th-century British intellectuals as "chromatic torture."

There has been a lot of thoughtful expository writing about this; if you are interested (and can manage to read an entire book) I recommend checking out Mitchell Stephens "The Rise of the Image, the Fall of the Word" and Walter Ong's "Orality and Literacy". They are somewhat dated now, but I think they really documented important transitions from antiquity to the end of the 20th century.
Posted by I Lamont at 8:13 PM