Facebook has a lot of problems on its plate right now, but one of the worst trends has been the poorly thought out march to video. It came from Zuckerberg and was repeated by various senior Facebook  executives, and then became a mantra for publishers. Many publishers made large investments in video programming for Facebook, only to find the money isn't there and Facebook has decided to demote publisher content.

This is not just large media companies that got burned, I know some smaller producers who believed the "five years the feed will be all video" baloney and shifted their efforts accordingly. Some were doing really important work, too, around causes or local news. What a waste.

Meanwhile, overall video consumption in Facebook is declining, and it's the one percent that get the most engagement, regardless of who the publisher is.

I personally would not mind if Facebook turned back the clock 10 years, when most conversations seemed to be personal and text-based, and the truckloads of memes, ads, gaming achievements, real and fake news, and videos of cats playing the piano had yet to be shoved down Facebook's maw. Old-school text discussions seem to work for Hacker News and large swathes of Reddit; why can't it work for Facebook?


My Facebook feed: Ads, viral videos, and other crap I would rather not see: 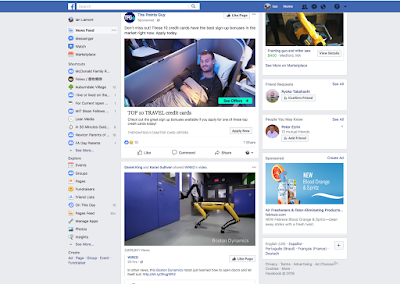